Wetherspoons has revealed that 66 workers across 50 of its pubs have tested positive for coronavirus but insists they are still safe to visit.

The chain confirmed that 28 of the 66 employees who tested positive have already returned to work after self-isolating.

Two pubs had up to four employees infected and six have confirmed two while the remaining 40 have reported just one worker testing positive for Covid-19.

JD Wetherspoon, which employs 43,000 people across its 861 pubs said that the vast majority of its establishments have recorded no positive cases.

The company hasn't revealed which pubs have been affected. 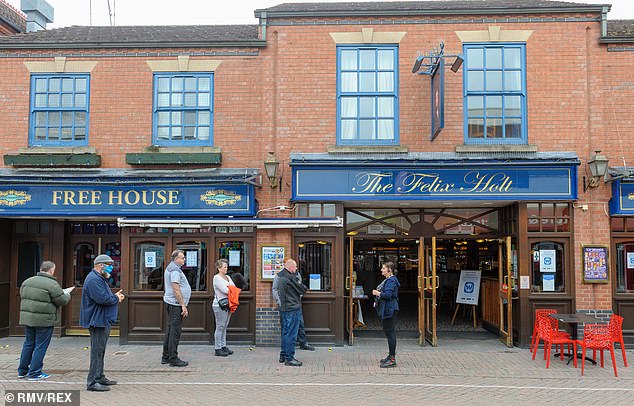 Wetherspoons has revealed that 66 workers across 50 of its pubs have tested positive for coronavirus but insists they are still safe to visit. Pictured is the Felix Holt in Nuneaton

The firm said most of the reported cases have been mild or asymptomatic and 28 of the 66 employees have already returned to work, after self-isolating in accordance with medical guidelines.

It follows a rise in new coronavirus cases, with a further 3,330 positive cases recorded in the UK on Sunday.

A whopping 32million Brits have crammed into Wetherspoons pubs since they reopened on July 4.

Pubs don't have to close after finding a positive test result unless they are made to do so by local health protection officials.