A furious cyclist who claimed he was almost run off the road has been charged by police.

The rider was cycling along a narrow road in Macmasters Beach, on the NSW Central Coast, on August 9 when he was overtaken by a Toyota driver.

Footage captured on the bicycle's rear-facing camera showed the Toyota swerving out from behind the cyclist and narrowly passing on his right.

'Took this to NSW Police and I ended up getting booked for not riding as near to left of the road as possible,' the cyclist explained. 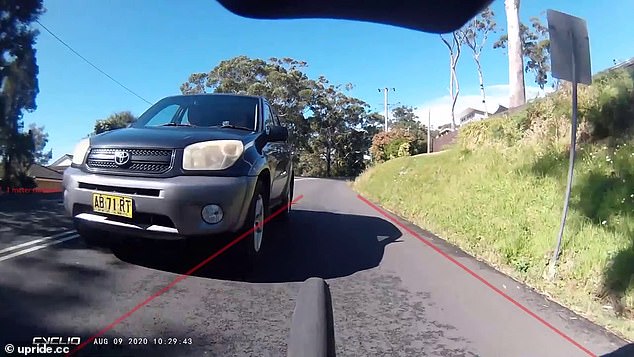 A cyclist claimed he was almost run off the road by a Toyota driver on the NSW Central Coast (pictured). He showed the footage to police but was charged for not riding closer to the left

The rider said he was unable to drive any further to the left as it was unsafe.

'Descending down an unguttered road with blind driveways at 50km/h, and I was as close to the left of the road that was safe in the circumstances,' he said.

Who was in the wrong?