Police make one of the biggest drug busts in Australian history after $40million cannabis crop is discovered in a rural town - with 14 men arrested over syndicate Thirteen million cannabis plants seized by police on NSW mid north coast The raid is part of strike force operation Harthouse, cannabis worth $40million  Police described bust as one of largest cannabis seizures in Australian history 14 Vietnamese nationals were arrested and charged during two day operation

Police have seized more than 13 million cannabis plants worth $40million in one of the biggest drug busts in Australian history.

Fourteen Vietnamese nationals were arrested during a two-day search of three properties near Taree on the New South Wales mid north coast.

They were each charged with a string of offences and remanded in custody with their visa status now being investigated by the Department of Home Affairs.

Strike force operation Harthouse was part of an ongoing investigation into an alleged criminal syndicate behind the large-scale cultivation and supply of cannabis.

NSW Police Drug and Firearms Squad Commander Detective Superintendent John Watson described the bust as one of the most significant in Australian history, adding police hadn't seen a cannabis seizure that size since the 1970s. 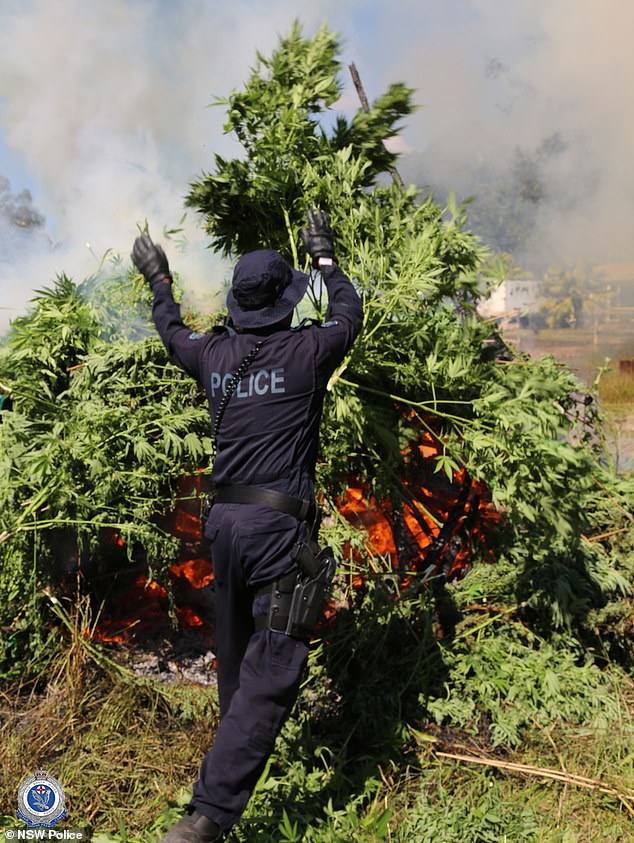 Harthouse was set up 12 months ago to investigate the cultivation and supply of cannabis across NSW, consisting of State Crime Command Drug and Firearms Squad detectives with assistance from the Australian Crime Intelligence Commission.

Following extensive investigations, Drug and Firearms Squad detectives with the assistance of local and regional officers, along with the Dog Unit, commenced a two-day operation at a property at Minimbah last Thursday.

Almost 5,593 cannabis plants were seized along with 39 pounds of dried cannabis, worth a combined total of $16.9 million.

Police arrested six Vietnamese nationals, including a 31-year-old permanent resident, a 41-year-old who is unlawfully in