AWAY is streaming on Netflix now and fans are keen to find out more about second-in-command Ram Arya in the sci-fi series. Who plays Ram Arya in Away?

Away has just landed on Netflix and the emotional space series follows astronaut Emma Green (played by Hilary Swank) and her crew as they try to reach Mars and create new life. Emma put her trust in her right-hand man, Ram, who ended up developing feelings for her. Express.co.uk has everything you need to know about who plays Ram in Away.

Ram is one of the main characters in Away and he is an Indian Air Force fighter pilot who joined Emma on her Mars mission.

Unlike the other astronauts, Ram did not have many ties with Earth and he was excited to explore space.

However, fans did learn his brother died after contracting a disease Ram suffered from as a child, and the loss continued to haunt him.

Ram is played by English actor Ray Panthaki, whom fans may recognise from his early acting days as Ronny Ferreira in EastEnders.

He is perhaps best known for his role in Marcella, and he starred in the recent Sky hit Gangs of London.

READ MORE: Away on Netflix explained: Is Space Blindness real?

Away Netflix: Ram suffered from an illness in space (Image: Netflix) 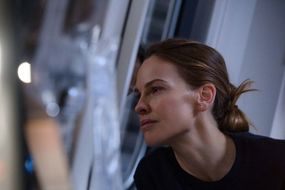 Away Netflix location: Where is Away filmed? Where's Away set?

The producer and director has performed on the stage and big screen as well as in TV series, and he starred in the West End play In My Name in 2008.

He directed the film Life Sentence which earned him Best UK Short at the East End Film Festival back in 2013.

The following year Panthaki, 41, was named one of 18 BAFTA Breakthrough Brits and he has since gone on to star in lead roles in many popular TV series.

The star is on Instagram and he has been sharing plenty of behind the scenes photos from the Away Netflix series.

He posted a photo with co-stars Vivian Wu, Mark Ivanir and Ato Essandoh with the message: "J’adore these people! first ever photo taken of us together, shoot day one (just missing our wonderful Hilary!)."

Fans went on to praise him for his tear-jerking performance, with one saying: "The series is really great, Ram is one of my favourite characters!"

Ram has plenty of emotional storylines throughout the series, including an episode in which he caught a